You have probably heard it making the rounds in some marketing campaign. The future of TV screen technology: 4K. The current standard is 1080p Full HD. To paint a clear picture, both are resolution standards. However, the 4K Ultra HD standard has four times more pixels than the 1080p FHD standard. On paper that sounds like a lot, and quite frankly it does in practice. However, the fact remains that the human eye can only see so much detail from a specific distance.

Currently, the viewing distance for most people (distance they sit from their TV sets) is approximately 10 feet, regardless of the size. To appreciate the difference considerably between both standards, one would have to be viewing a very large display at the range of 50 to 70 inches and above. This is not to say 4K doesn’t look better than 1080p in a smaller screen, in fact the difference is very noticeable in a side-by-side comparison

With smaller-sized TVs, the difference becomes decreasingly noticeable until it becomes negligible. Naturally, the human eye is more sensitive to contrast ratio and colors than resolution, a reason why both should be prioritized over resolution.

However, pixel count is the not the only plus point the 4K standard is pushing. It also features exciting picture quality enhancements through two techs called High Dynamic Range (HDR) and Wide Color Gamut (WCG): More on these in the next section.

Still, the question is not if these techs are truly as promising as they are remarked to be. A far more important question is the level of existing support for these next-gen technologies.

For now, only the most expensive TVs sport the features, there’s only little content that take advantage of the technologies, and this wouldn’t change until sometime next year. That’s when the fancy UHD Blu-rays and impressive titles supporting WCG and HDR are expected to be more common.

Therefore, this is a classy case of if you want to be an early-adopter or if you want to bid your time. Becoming an early adopter is certainly a pricey endeavor. Contrastingly, by bidding your time, you take advantage of the fact that more TVs will support HDR/WCG in the future and price will fall naturally.

In other words, you could buy a $1,200 TV now, rather than a $3,000 TV, that looks fantastic with current content. Then in a few years, when high-end HDR/WCG UHD content enters the mainstream, you will be able to spend $1,200 on a TV that will outperform today’s $3,000 TVs. You will be saving money now and in the future.

This is the latest update of the game-changing HDMI standard. Thankfully, it is backwards compatible and uses the same connector & cables as the previous versions. It supports higher frame rates, increased colors, and greater dynamic range: Making it a necessity for UHD Blu-ray and other UHD content now and in the future. There is a subtle difference between HDMI 2.0 and HDMI 2.0a. The latter is an incremental upgrade. The difference is that certain HDR content (most of which are not currently available) needs 2.0a. All our picks support HDMI 2.0 and some have HDMI 2.0a.

This refers to the latest version of the copy protection standard used over HDMI. It is a requisite feature for any HDMI device (TV, receiver, or sound bar) to display or transmit UHD images. All our picks support HDCP 2.2.

When watching a movie of 24 frames per second, abbreviated as 24p, on a TV with a refresh rate of 60 Hz, there is a bit of compensation done by the TV automatically. Half of the frames are shown twice and the other half are shown thrice to make the 24 fps match the 60 Hz display. The resultant effect most noticeable on panning shots is called judder, and negatively affects the viewing experience. Some 120 Hz displays avoid this effect by increasing the repetition of each frame to five times.

This feature refers to screens that have their backlight placed behind the LCD panel. In addition, individual zones are turned either on or off depending on the content. These screens are usually larger and more expensive. However, they typically provide the best LCD picture quality by improving shadow detail and contrast rations.

HDR refers to the ability of a TV to offer much brighter highlights while maintaining deep blacks. The feature is best suited for special HDR content. In comparison, a standard TV has a peak brightness of about 160 cd/m2. In high-end HDR sets, that value can hit 1,000 cd/ m2. The resultant effect is electrifying as contrast ratios are improved and there are visual effects that make bright objects (like fire, the sun, or a photon torpedo) apparently pop out of the screen.

This offers a TV the ability to display way more colors than current TVs can. The emphasis is on producing never-before-seen colors on TV that the human eye can perceive. Consequently, images will be more life-like and bear closer resemblance to what is obtainable in many current state-of-the-art movie theaters.

LCD is more of the winner in the TV space. However, OLED is a budding challenger with a lot of punch in its arsenal. First, it creates light inside each individual pixel without the need for backlight. It is also able to dim each pixel individually, all the way down to black—a feat LCDs cannot replicate. With these peculiar features, OLED TVs are able to offer an infinite contrast ratio and better picture quality enhancements that make for a terrific viewing experience.

What is the Best TV? 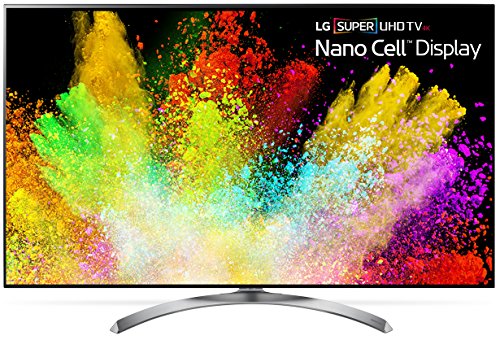 Check Price
There are times when LG’s 65EF950V picture looks pretty amazing and nearly perfect. To top it all off, the screen is completely flat – this is quite rare for an OLED screen which tend to come in a curved screen. While we don’t necessarily find a curved screen to be all that bad, we have experienced some minor geometry distortions when viewing them from certain angles or under specific lighting conditions. The 65EF950V takes care of this potential for error with a completely flat screen, and it looks spectacular.

There are four HDMI ports, all of which support high dynamic range playback and can play 4K UHD content up to 60 frames per second. HDR can also be played through the 3 built-in USB ports. Wi-fi is built-in which allows you to stream multimedia through your network as well as access all of LG’s Smart TV online resources. As expected, Netflix and Amazon apps support 4K streaming. The webOS interface is simple, responsive, customizable, and easy to use. The speakers are top-quality and designed with Harman Kardon. All of this is packaged in an extremely thin TV with a bezel of less than one centimeter.

For those of you who like to tweek your TVs settings, the 65EF950V is a dream, with a variety of calibration tools including gamma control, OLED Lighting, brightness, and a bunch of color/white balance management alternatives. Some claim that OLED is not the best choice for HDR, though we would have to disagree. Despite the fact that OLED is less bright than an LED display, we still found the 65EF950V to look excellent with HDR content. Another clear advantage for OLED over LED is the ability to control the light level of each individual pixel. This allows the TV to display very subtle changes in color or shadow – you can see some of the darkest darks right next to the brightest whites all in 4K UHD. An ending note: if 3D content looked as good as it does on the 65EF950V it would most likely be much more popular and established. 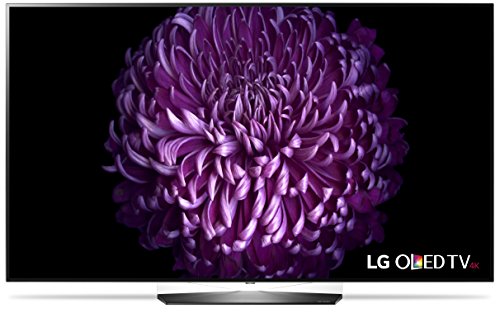 Check Price
LG’s EG9600 is one of the best 4K TVs we have encountered. The EG9600 is available in 55 and 65-inch displays. For gamers, and pretty much anyone else looking for the best TV, we highly recommend the 65-inch, which allows you to take full advantage of the 4K OLED screen. The TV is very thin, and the display is slightly curved with a bezel that measures less than half an inch. It includes a TV stand which is solid and curves slightly more than the TV itself – wall-mounting this TV requires a special wall bracket because standard VESA mounting kits are not supported.

One of the main characteristics that sets this apart from the rest of the competition is the amazing OLED display (short for organic light-emitting diode displays). OLED is often seen in much smaller screens like computer monitors or smart phones, but they are still often unheard of in much larger screens that are used for TVs, mainly due to the costs it takes to manufacture them at a large scale. OLED functionally differs from that of an LCD screen, which is currently the more commonly seen of the two. OLED displays produce a much more vivid and overall more exceptional picture, partly because they are able to create a perfect shade of black. The LG EG9600 is no exception, and blows away most other TVs in a side by side comparison.

Input lag measures at 50.1 ms with a response time of 0.3 ms – some excellent numbers and are much needed for the avid gamer. You could probably get away with some less astonishing numbers for purposes other than gaming, but being able to brag about a 0.3 ms response time is just another perk with this TV. Video games look fantastic, and there is very little motion blur. This is important not only for gaming but any fast movement across a screen (sports fans).

Not only does this TV look exceptional with video games, it also happens to excel with any picture you throw at it. The Web OS Smart TV functionality is impressive and provides a customizable experience and has most of the major apps. For those who have some extra money to invest in the best gaming TV, the LG EG9600 is an excellent choice.

You can find this same review in our Best Gaming TV complete guide. 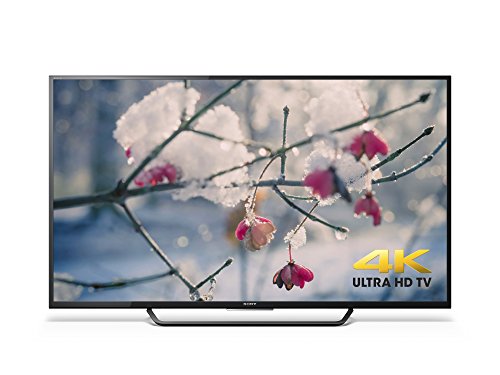 Check Price
Sony is responsible for producing some of the biggest and baddest budget-oriented 4K UHD TVs and the X810C is no exception. The X810C is available in both 55-inches and 65-inches, both of which are reasonably priced and have excellent specs. If you’re looking for a fantastic picture, decent connectivity and compatibility with the most advanced 4K content available today, the Sony X810C is an great pick.

While not Sony’s top of the line when it comes for 4K UHD setups, the X810C is a great combination of aesthetic style and picture quality at a reasonable price tag. Unlike many of Sony’s other TVs, the X810C series don’t have the in-your-face side mounted speakers built into the frame. The bezel is minimal at just over half an inch and the screen itself has a thin side-profile – a definite plus for the consumers short on space.

The Sony X810C utilizes Triluminos Display technology and produces a fantastic picture with great color reproduction and contrast, top-end judder reduction systems, and an immersive visual experience. Additionally, the upscaling engine is better than average and does an excellent job handling 720p and 1080p content – in fact it happens to look much better on this TV than a standard 1080p setup.