“Regular,” “Short Throw,” “Ultra Short Throw” are terms to define how far out from the screen the projector has to be to project a suitably clear image. The traditional projector is required to be positioned a considerable distance away from the screen. However, this led to concerns about shadows obstructing image from the screen, and the obvious fact that projectors could not be used in spaces where there is inadequate room.

In the search for a solution to the limited-space problem, the manufacturers birthed the short throw projectors first, and after much improvement moved on to Ultra Short Throw projectors. In the table below, we compare projectors in the three throw distance groups.

Before we discuss the benefits and detriments of short and ultra-short throw projectors, let us enumerate instances where they would be necessary.

For use in a small space, it is important to look out for projectors with quieter fans are they are more desirable.

The brightness rating of projectors is measure in lumens. As a rule of thumb, it is recommended to go for projectors that have high brightness ratings. This is because; a brighter image will still be visible in a space where there is ambient lighting, say the lights are on, or it is difficult to restrict daylight from trickling in.

To understand the relationship between image/screen brightness and ambient lighting better, try reducing the screen brightness of your smartphone while you are outdoors and notice the visibility of images in your screen reduce.

The lamps or light bulbs on the inside of DLP (digital light processing) projectors have a life cycle. In addition to needing replacement every occasionally, they also tend to lose their brilliance over time. LED and/or Laser systems are preferable in that they do not need replacement nor does the brightness level degrade over time.

With that said, DLP projectors have certain advantages in image processing and are usually the most cost-effective choices, so if you are stuck with making a DLP projector choice, do not sweat it. The lamp life cycle of top-grade DLP projectors is 5000 hours anyways. On average, that would get you about half a decade of usage before the lamp needs changing. To check degrading brilliance over time, premium manufacturers routinely include software optimizations in their models to limit the wearing out effect massively. 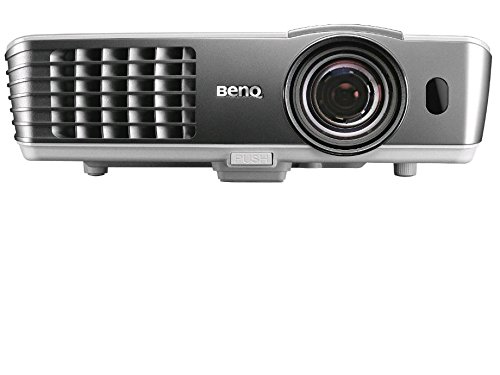 On top of the HT1085ST’s offering is the BenQ Kit. It is BenQ’s answer to the WirelessHD feature spotted in premium Epson products. What the kit does points down to convenience. The Kit includes a transmitter that serves as a hub in that it receives video streams from one or more sources, and then transmits received media content (video and sound) to the projector wirelessly. Everything is seamless; it helps streamline connectivity, and no doubt eliminates the ‘clutter’ problem that is always the case with wired connectivity on standard projectors.

Flexibility is not all to love about the BenQ Kit. The official range is capped at 100 feet in a line of sight connection. In our testing, we placed the transmitter on one floor, and then we placed the projector and receiver on the floor below. The distance between them was 30 feet, and the video content stream seamlessly without glitches. That was terrific performance, which demonstrated flexibility, reliability, and convenience all rolled into one amazing package.

The HT1085ST has a built in audio system—a 10-watt mono speaker. It is basically the standard on major models. Sound quality is decent, and the volume can fill up an average-sized living space. For better sound quality, you would have to connect a dedicated audio system, which is pretty much a given on all projectors in the market.

The HT1085ST has an exuberant image quality. Delivery of everything from color quality, skin tones, to shadow detail was top-notch. Rainbow artifacts were also reduced to a bare minimum. Rainbow artifacts, which display as flashes of red, blue, and green, are unintended consequences of the DLP technology that plague DLP projectors. Eliminating them is out of the question, but limiting their occurrence is possible, and that is what the HT1085ST does well.

Brightness levels bolstered image quality, and it is possible to lower or increase brightness using any of the available brightness presets, including the Eco mode.

3D support is available on the BenQ HT1085ST. 3D image quality was splendid in our tests. Crosstalk and motion artifacts were absent, and motion was smoother than on most 3D projectors. It offers 3D support, so you will need a pair of 3D glasses— such as these 144-Hz DLP-Link glasses found on Amazon. 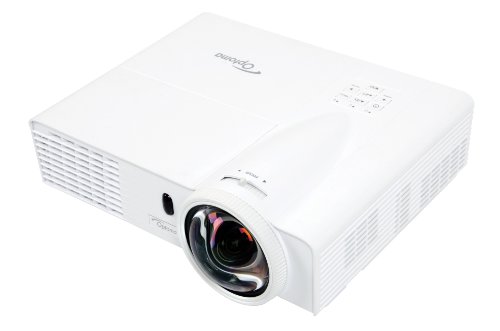 The Optoma X305ST is primarily a data projector, although its terrific support for 3D means it also has home entertainment capabilities baked in. Notwithstanding, it sports a throw ratio of less than 0.6 like the BenQ HT1085ST, with top-grade image quality and all-round performance.

Brightness level of the X305ST is impressive at 3000 lumens which is more than sufficient for virtually all private and corporate use be it in data presentation in a classroom, a business presentation, or a late night home cinema setup.

The X305ST makes a statement in the DLP segment by doubling the industry standard life cycle of a lamp. The industry standard is 5000 hours; however, the X305ST offers double that at a whopping 10,000 hours. Here is the best part, the device offers up to 70% in energy savings using proprietary Eco+ technology.

A brightness rating of 3000 lumens is not enough to produce superb image quality, but it is a strong influencer. Color accuracy is another important factor, and with Optoma’s own unique optimization technology BrilliantColor, the X305ST is able to provide vivid projected images in a number of preset display modes for top-grade performance.

The third of four important factors that influence image quality is contrast ratio. Sharp images with exquisite graphics and crisp text are possible many thanks to proprietary DarkChip3 Technology that imbues a contrast ratio of 18,000:1 in the X305ST. This propels this projector into the elite group of projectors with brilliant whites and mega-rich blacks.

Furthermore, image quality on the X305ST is very good. Shadows and motion artifacts are eliminated. Rainbow artifacts, which often plague DLP projectors, are reduced to a bare minimum on the Optoma X305ST.

3D is supported on this projector with excellent clarity and image quality. You would need a pair of DLP-Link glasses to immerse fully into 3D on the Optoma X305ST. It supports 3D output from a range of devices including computers, Blu-ray players, 3D TV broadcast setup, and gaming consoles.

It also supports 3D data of different formats and forms, whether it is an exploration of space, the human biological system, a blockbuster movie, or of 3D gameplay. 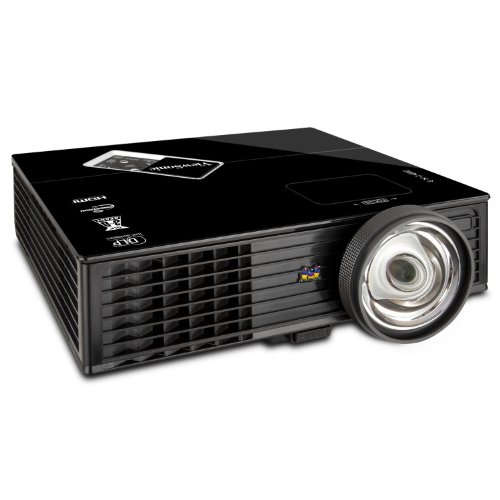 The top appealing reason to get the PJD6383S is its versatility that makes it great for data use in the classroom, a variety of business settings, and even home video use. It sports brightness levels of 3000 lumens, which is more than enough to fit standard uses under the usual dark lighting conditions as well as moderate ambient lighting conditions.

For top-grade performance, it uses ViewSonic’s proprietary BrilliantColor technology that brings colors to live with top-grade color accuracy and color temperature. Additionally, a 6-segment color wheel is included in the PJD6383S build for sharp, crisp, and vivid images.

Much versatility is supported as images all the way from 30 inches to as large as 300 inches can be projected without picture distortion or having you go through many hoops while doing the setup. The design of the ViewSonic PJD6383S does not include a filter, which is terrific as it offers an improved system of delivering images of exciting quality without having to worry about replacement of a filter.