Today, it is difficult to imagine a home or a business office without a router. Routers are very important in a multi-device setting, allowing the sharing of an internet connection for several devices at the same time. The reason for purchasing a router may then be either to tap into the convenience of owning and using one, or to replace an aged router with a router that has better functionality and incorporates the latest technological features.

For some though, there exist barriers on the pricing scale. Currently, pricing does not tell a good tale about the quality, durability, or functionality of a router. Prices are all over the place between brands. Therefore, for buyers who are on a budget and need to purchase the best router under $100, making a choice is difficult.

But it shouldn’t be a difficult choice, which is why we are here to help. In our list below, we unveil the routers that have the “best bang for buck” quality. The best cheap routers are outlined for you below.

Criteria for Choosing the Best Router Under $100

The best routers under $100 should boast the following:

Before we move on to the real deal, let us discuss important buying considerations to note when purchasing router priced below $100.

Routers are generally of two types: wired and wireless. In the past, wired routers had a reputation for offering better protection. These days, however, this is a myth: many thanks to recent technological advancements.

Convenience has been a core reason why technology has enjoyed widespread adoption. For wireless routers, this is especially the case as physical internet access is not a prerequisite for several devices to use a shared Internet connection.

The Relevance of Ports

Wireless is the new thing, but for all-round functionality and bespoke performance, routers regardless of type should have ports. Ports enable support of legacy devices that do not have wireless connectivity options. Ports are also good news when wireless devices require ad-hoc wired use of the Internet owing to malfunctions or some other weird techie reason.

Don’t we love it when a device has extended practical capabilities? Like when you do not have to swipe your card at a mall, rather making payment with an NFC enabled mobile phone.

In the networking industry, TP-Link stands tall as a premium brand, so when I discovered the TP-Link Archer C7 AC1750 Dual Band Wireless AC Gigabit Router had launched at a sub-$100, naturally I thought this should be something. TP-Link did not disappoint with this router in the affordable segment.

I was first glued to the TP-Link Archer C7 AC1750 Dual Band Wireless AC Gigabit Router sporting the 802.11ac standard, which until now has been an exclusive feature of the high-end router models across the industry. And, unsurprisingly, this feature gives it an edge over similarly priced models from competing brands.

Now what is the fuss about 802.11ac? Because it is the next-gen wireless standard. It is similar to what 4G is to 3G currently and what 5G will be to 4G in the near future, in cellular connectivity. You shouldn’t expect the fastest speed or performance on the standard, as can be gotten from high end models, but you can bet that the speed is decent and better than speeds from comparable models. Additionally, it has a respectable throughput, and the wireless coverage is outstanding for a model this inexpensive.

Finally, this router cuts down on the number of extra treats you get when compared to the offerings of high-end 11ac routers. But not to worry, this is to be expected from a router that costs only half the price of the high-end routers.

Overall, this router is a bargain at the price, with admirable functionality. Totally worth every dollar spent on it.

On a size scale, the TP-Link C7 is a fairly large router. The dimension of the device is 9.6 by 6.4 by 1.3 inches. The housing of the device is plastic with a shiny black finish. Fair to say, the C7 is not a winner in the design segment when compared with newer premium 11ac routers hitting the store shelves. However, it is not an eyesore to look out and so gets a pass as far as design goes.

Top on the spec sheet of the C7 is the presence of three 5dBi antennas that are detachable. A great addition, these antennas are among the toughest antennas of any router I have tested in my many years of testing. With the C7, gone are those sorry sights of antennas flopping over and tilting when firmly attached. The TP-Link Archer C7 AC1750 Dual Band Wireless AC Gigabit Router antennas stay sturdy and upright after been attached.

On the front panel, the device sports the typical LEDs found on most routers. On the rear panel are two USB 2.0 ports for external drive and printer support. Additionally, there is a Gigabit WAN port and four Gigabit Ethernet ports on the back of the device. The controls of the device are situated at the rear. There, you’d find the power switch, a toggle button to turn the wireless radios on or off, a WPS/reset button, and the antenna connections.

In addition to the three detachable external antennas, the TP-Link C7 also sports three internal antennas. In my testing, I found that the device had exceptional wireless range, thanks to these fixed internal antennas. Connection speeds for the TP-Link Archer C7 AC1750 Dual Band Wireless AC Gigabit Router are 450Mbps and up to 1300 Mbps on the 2.4GHz and 5GHz bands respectively. Newer premium routers support connection speed of up to 1700 Mbps on the 5GHz band, but for the roughly 30% increase in speed, you’ll have to fork out nearly 200% the price of the TP-Link C7. 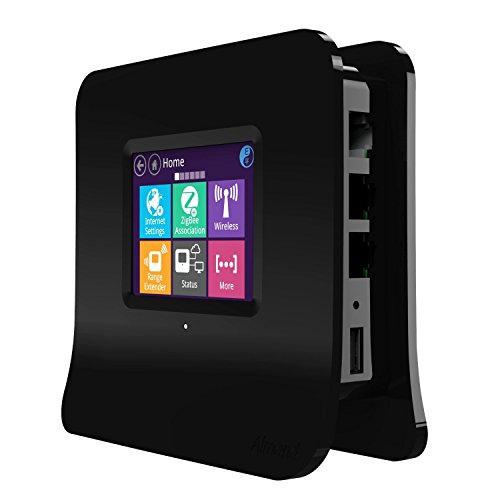 The Securifi Almond 2015 Long Range Touchscreen Wireless Router is a good device in the sub-$100 price segment. Touting a touchscreen, a compact form factor, increased flexibility, adopting the latest security standards, easy setup, and decent performance, are the foremost reasons why you should consider purchasing this router. However, there are notable omissions that may be deal breakers for some buyers, depending on what one needs in a router.

Furthermore, the Ethernet ports on the Almond stick to the legacy 10/100 spec rather than the now prevalent Gigabit (1000 Megabit) standard. This is a sore miss, if you need many high-speed connections.

These omissions do make the Securifi Almond 2015 Long Range Touchscreen Wireless Router a tad bit underwhelming, but there are good reasons to look beyond the spec sheet.

There are two setup choices for the Almond. Whichever you choose though will lead you from start to completion within minutes. The speed is not all there is to be astounded by. I found it remarkable that there was absolutely no need for a CD, a smartphone, a tablet, another computer, or IP address(es). We are confident it will be very difficult to find a router with a quicker and more user-friendly setup baked in: certainly not at the same price range.

To ascertain the performance of the Almond, we put it to a real-word test consisting of four scenarios. The results are shown in the table below:

First off, the speeds lag behind those of premium 802.11ac routers like the D-Link DIR-868L and the Linksys EA6500. However, the speeds are on parity with mid-range 802.11n routers. Therefore, if you are looking to upgrade from an older 802.11g router, you should seriously consider this router.

As far as speed fluctuations with respect to distance (speed-distance relationship) go, it is interesting to notice limited speed variations at significant distances. For a router priced below $100, this is commendable. While there are routers that satisfy the appeal of 100Mbit connections for techies, those routers are not in the price range covered in this buying guide. For what it is worth, a 14Mbit connection speed is sufficient to stream HD video. 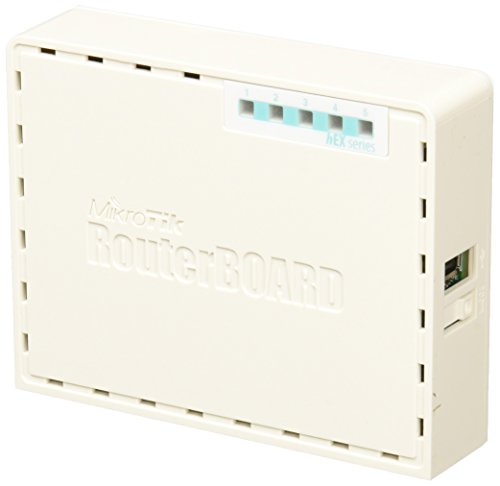 There are many reasons to love the Mikrotik RB750GL, and one of these is its form factor. Here in a router priced well below $100, you find a design that rivals the designs of high-end models. The Mikrotik RB750GL mini-router sports a modern premium sleek look, in a compact design that appears to be confluence of exciting engineering prowess and art.

The Mikrotik RB750GL emphasizes the need of functionality. It boasts of 5 Ethernet/LAN ports for comprehensive connectivity. These permit fast and stable wired connectivity for use in an office or home. This mini-router is therefore well suited for a small office or home office (SOHO).

The Mikrotik RB750GL may be described as a mini-router, but that attests to its size than to its functionality. The device is neither stripped down in functions, nor are core functions sacrificed in this device. It is equipped with a Router Operating System that is certified with a fully featured Level 4 certificate.

Furthermore, optional switch chip functionality is built into this device. This enables the device to record increased throughput (throughput refers to the information of raw data that is processed or communicated) for both smaller and larger packets. 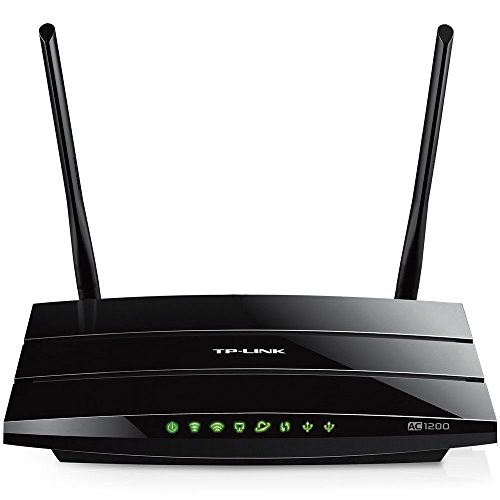 In addition to the antennas are 2 USB, 1 WAN, and 4 LAN ports for optimal connection sharing and connectivity. Use of these ports offers speeds that are up to 10 times the speed of the fastest Ethernet available.

Convenience, peace of mind, and parental assurance are some of the immediate rewards of using the management tether app of the C5. The app permits users to ascertain the following:

All of these can be found out remotely, while the user is away from home.

Users who are interesting in finding a router to accommodate their high-bandwidth needs, say streaming online games or streaming HD movies, will find the TP-Link Archer C5 AC1200 Dual Band Router to be well-suited.

The C5 is also easy to setup, with the manufacturer including a user-friendly step-by-step installation guide for all users. The TP-Link Archer C5 AC1200 Dual Band Router is also covered by a two-year warranty. 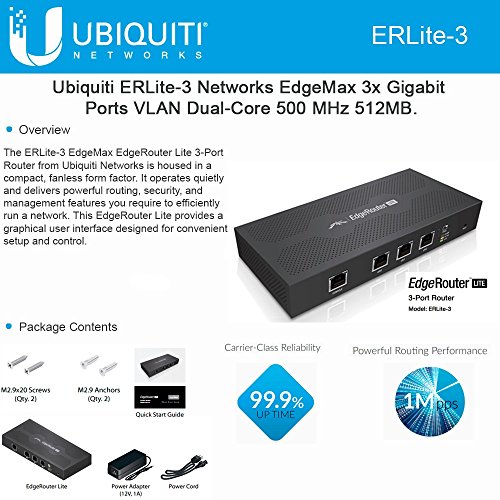 The Ubiquiti EdgeMax ERLite-3 has enjoyed some buzz at the SNB forums as a new kind in the block that could give competitors a run for their money. We can’t say these assertions are bogus, but the device works as intended and has good functionality.

Aside that, the router comes equipped with 3 Ethernet ports. It has several ports, lights, and buttons that enable fast connectivity and decent functionality. On its bottom panel, the Ubiquiti EdgeMax ERLite-3 has screw mounting slots that enable a user to mount connectors pointing either up or down: a nifty feature for a router priced below $100.

Setup isn’t as fluid as we’d want, especially when compared to the Securifi Almond (#2), but it wouldn’t make you want to bang your head on a wall either.

In general, for the best router under $100, you will have to look at models that are placed higher in this list. However, for the price, the Ubiquiti EdgeMax ERLite-3 is a good router whose functionality is commendable.